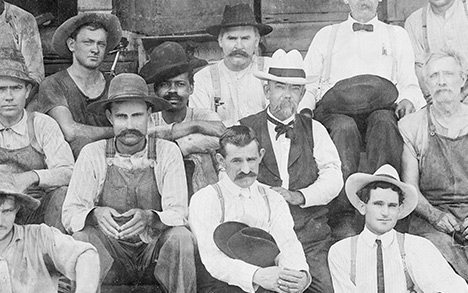 In Lynchburg, Tennessee, the name Nearest Green has always meant something special. His birth name was Nathan Green but those who knew him best, his family and friends, called him Uncle Nearest. His children and grandchildren solely referred to him in Nearest in each of their legal documents. No one actually knows how he obtained that nickname, so we assume he was the “nearest and dearest” to so many who came in contact with him. An incorrect spelling of his name in the 1880 census as Nearis, has caused some confusion. But rest assured, no one in his family is confused about the spelling of his name: Nathan “Nearest” Green.

Those outside of this small southern town 70 miles southwest of Nashville knew nothing of Nearest until a book published in 1967, Jack Daniel’s Legacy, revealed him to be the enslaved man who taught Jack Daniel how to make Tennessee whiskey.

Five years later, a publication of the Tennessee Historical Quarterly – Spring 1972 shared the history of Jack Daniel Distillery and listed Nearest Green as their first head stiller (what is now commonly referred to as master distiller).

Many wonder why we refer to him as Nearest versus Nathan. There are two reasons. The first, is formerly enslaved people often chose what name they wanted to go by following emancipation, as many of them were named after their slave owners, the children of slave owners or other prominent slave traders. In the case of Nearest, his legal name was also the name of the largest slave trader in Middle Tennessee, Nathan Bedford Forest. Tax documents show Forest traded more than a thousand slaves annually. He was a prominent Confederate Army general during the American Civil War and the first Grand Wizard of the Ku Klux Klan from 1867–1869. Forest came through Lynchburg, Tennessee, and recruited men Nearest knew well, one of which was said to be Dan Call, as a part of his Forest’s Escort Company during the civil war. In advertising for men to join his Escort, he posted advertisements to join his regiment, with the slogan, “Let’s have some fun and kill some Yankees!” It is for this reason, we believe Nearest may have chosen for forego use of “Nathan” following ratification of the 13th amendment. The second reason is it is the name he used when referring to himself in legal documents, as well as the name his children used.

Nearest Green was the first head stiller (now, referred to as master distiller) for Jack Daniel Distillery until it moved to its current location sometime between 1881-1884. Although it appears Nearest chose not to move to the new Distillery, he did live nearby at County Line. Nearest was the only known master distiller for Distillery No. 7 in district number four. This distillery, located at the Dan Call Farm, would later have its distillery number changed, against the strong objections of Jack Daniel, to distillery number 16 in district number five.

Three of Nearest’s children, George, Lewis and Eli Green, joined Jack’s team at his new Distillery location. Nearest’s grandsons, Ott, Charlie, and Otis, would later join them. At least one branch in the Nearest Green family tree followed Jack’s nephew, Lem Motlow, to St. Louis in 1910 when Jack Daniel Distillery was moved there due to Tennessee prohibition, which began 10 years prior to federal prohibition. The lineage of Otis Green (who later added an “e” to his last name, making it “Greene”), continues to live there to this day.